AVATARS OF THE
GREAT AWAKENING.

Invisible UV ink can only be seen under UV backlight. Each note contains a unique unvisible image or symbol on the front. Crucially, the invisible image is UNDER the intaglio – meaning, that someone cannot simply overprint the note with UV, they have to put intaglio over it for it to be valid. In this way, the intaglio secures the UV, doubling the security.

Intaglio is a labor intensive print process that relies on pressure to create slightly raised printing. Ultra hi resolution intaglio can be used to create micro lines of text and other features that cannot be replicated by any other means. Intaglio is standard in banknote printing, but rarely on both sides of the note. These artworks push technical boundaries, even by banknote standards, all by hand.

High resolution printing allows for microscopic definition – details that cannot even be read by the naked eye. These notes are filled with such details – micro lines of texts can be found on both sides.

In the spirit of the 19th Century – golden age of line engraving, and true to contemporary banknote production, each note features a hand engraved portrait. No filter has been used – every line, dash, and dot has been placed by hand to create an authentic banknote portrait.

Banknotes are reserved for the status quo – those figures from history whom a central bank is willing to back with its trust. Today, we are witnessing the splitting of narratives – there is no longer a dominant status quo. A banknote designer – the architect of trust in the status quo – emerged from secrecy, to produce these pieces of paper, to celebrate the revolutionary moment, and affirm the inevitable awakened future.

What started as a straightforward design challenge inspired by memes and controversy surrounding the Trump presidency, grew into an unprecedented and uncategorizable series of artworks.

At their root, this series proposes something new: as far as it can be known, there has not been a family of banknotes created outside of the banknote industry, single-handedly, with the same level of design knowledge as applied to circulating national currency.

The resulting artworks become absurd in their sincerity.

Are they functional currency? Are they avatars for banknotes? Are they monuments to our world’s unique duality? Are they precursors to crypto paper wallets? Are they art, or design? Or are they all of the above?

With refined and specialized design know-how, these artworks become sincere. But if they’re so close to national currency, they would threaten it: craft becomes dangerous. How appropriate, that these ‘banknotes’ celebrate fiat money’s major threat: cryptocurrency. 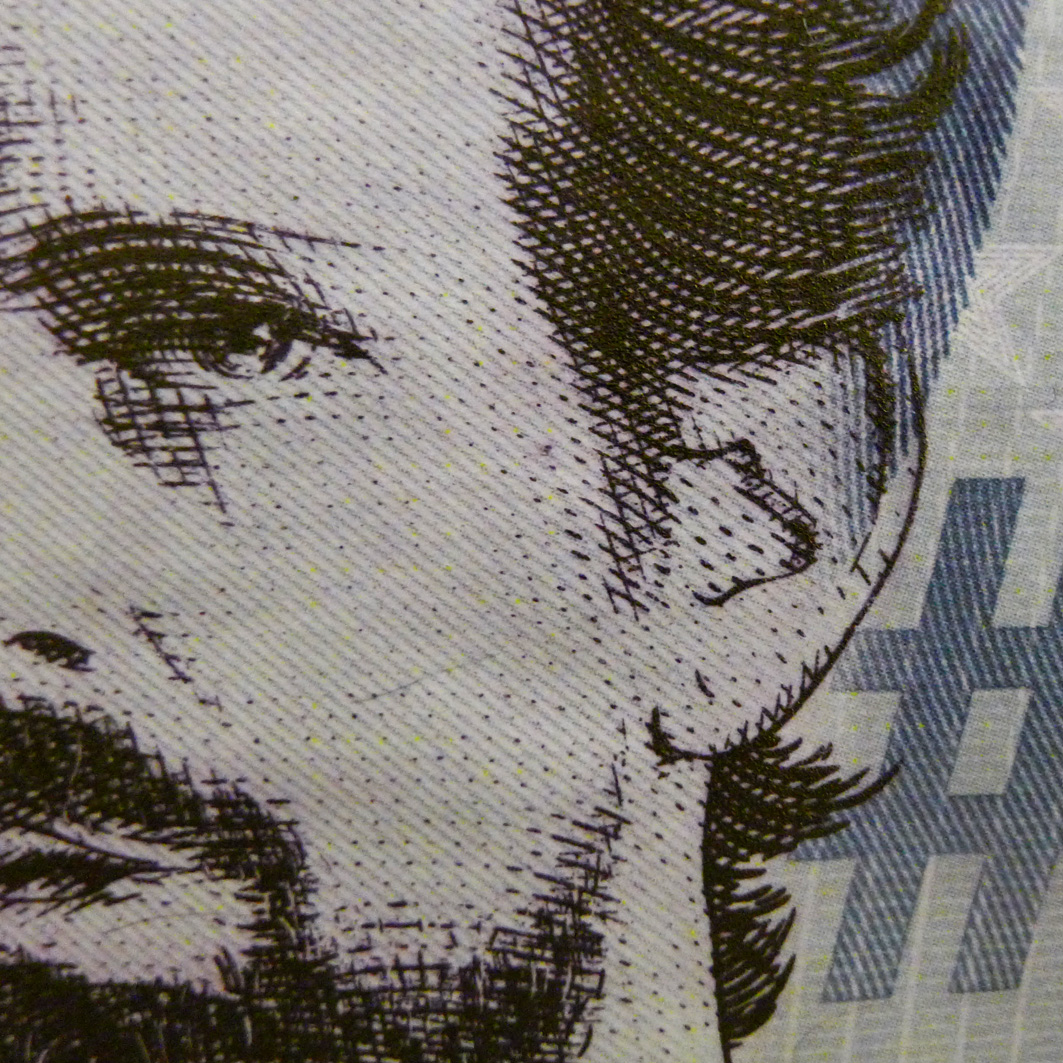 ‘The Avatars of the Great Awakening’ represents an expanding group of individuals who have made major recent cultural impacts in the field of freedom, sovereignty, self-rule and truth. Invariably, these individuals reveal the hierachies in our narrow cultures, and for that, they find themselves at odds with culture: in hiding, imprisoned, and in conflict with self-declared authorities.

Julian Assange (Wikileaks), Edward Snowden (NSA), Ross Ulbricht (Silk Road) are all characters in the recent story of Humanity’s search for self-determination. Anonymous, who have appropriated the Guy Fawkes mask, represents the element of Humanity that is chaotic, anarchic, rebelious, disruptive and uncontrollable – the spark that lights Human creativity. To borrow a term that is usually applied to art, these figures are the avant garde.

Ironically, The most controversial character in this series is Jack Dorsey – CEO and co-founder of Twitter – who appears to bear no personal cost for his work. Unlike the other figures, he is handsomely rewarded for it. Dorsey was chosen because the Twitter platform has been – whether he intended or not – the major site of dissemination of the other figures’ revelations. Not least, Twitter is the place where these designs were first publically revealed!

Just as the avant garde of culture (what is often called ‘alternative’) has appropriated social media to find a voice, here, Jack is also appropriated by the very word applied to his opposition: he is a Deplorable!

Uniting the figures is the fact that all have publically endorsed cryptocurrency. It is absolutely correct that they ought to be honured in the first ‘legitimate all-original NFT banknote design set’. 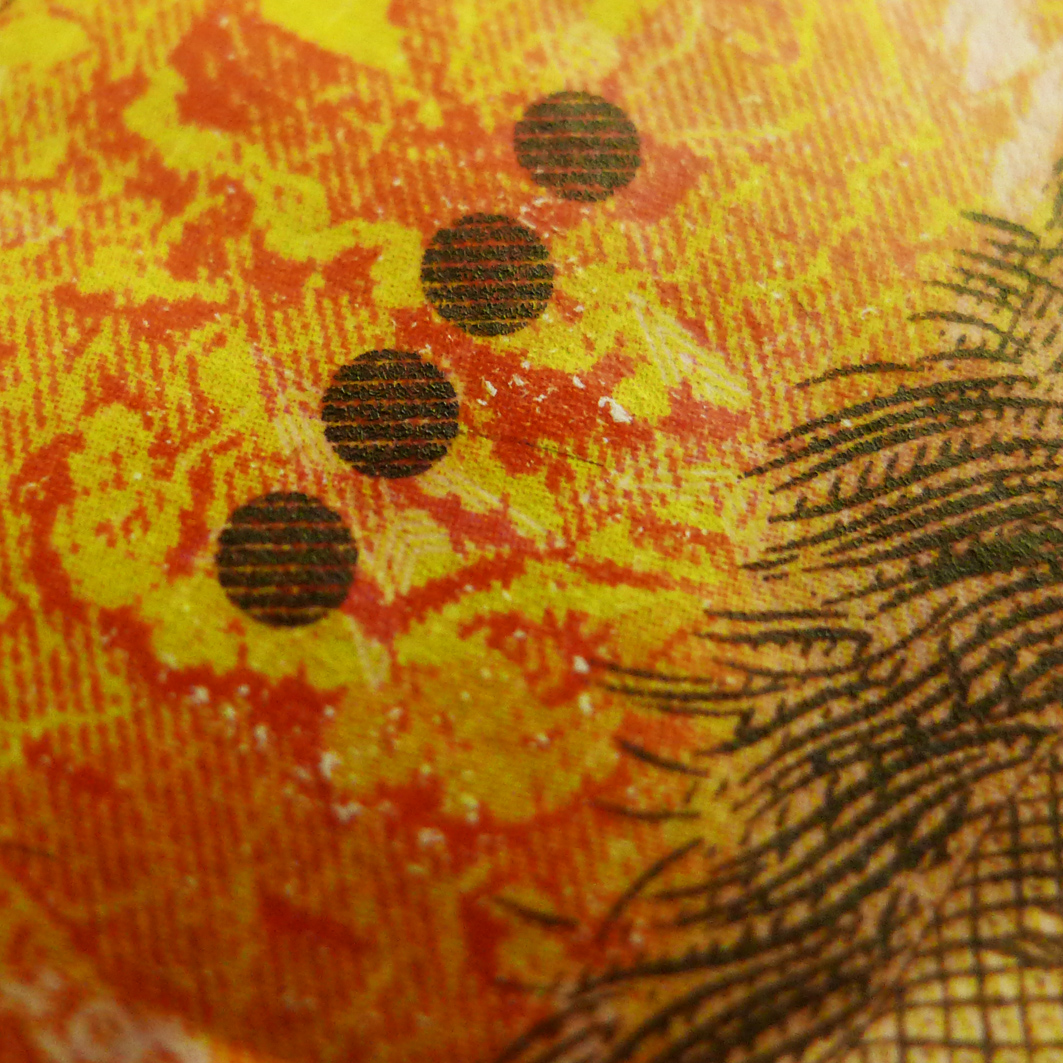 Anyone familiar with world paper money will quickly notice that the design is very close to the circulating Venezuelan currency.

Whilst the word ‘Deporables’ lends itself well to a latin accent, the Venezuelan Bolivar was chosen as symbolic of a choatic place in a state of disintegration, where narratives short-circuit and secrets are revealed. Venezuela has become a picture of 21st century fiat miss-management and societal descent.

The use of the Venezuelan Bolivar is also a reference to its popularity with banknote hobbyists and counterfeiters, who find that the Bolivar, when carefully washed of its inks, is similar enough in feel and dimensions to US Dollars.

The design also features frog imagery. The frog is symbolic of ambiguity and the chaos of the underworld, as it can live in both water and on land, and is the guardian of worlds unseen. 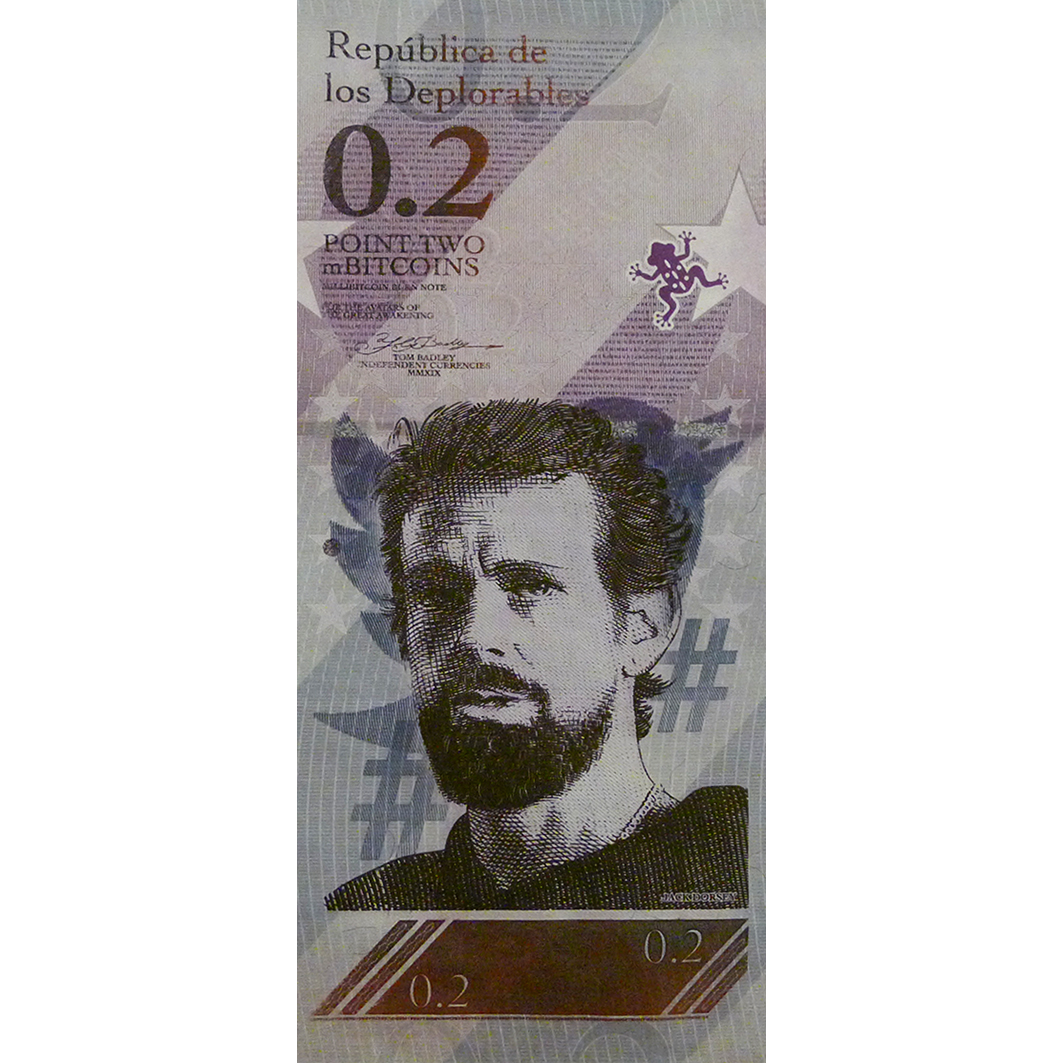 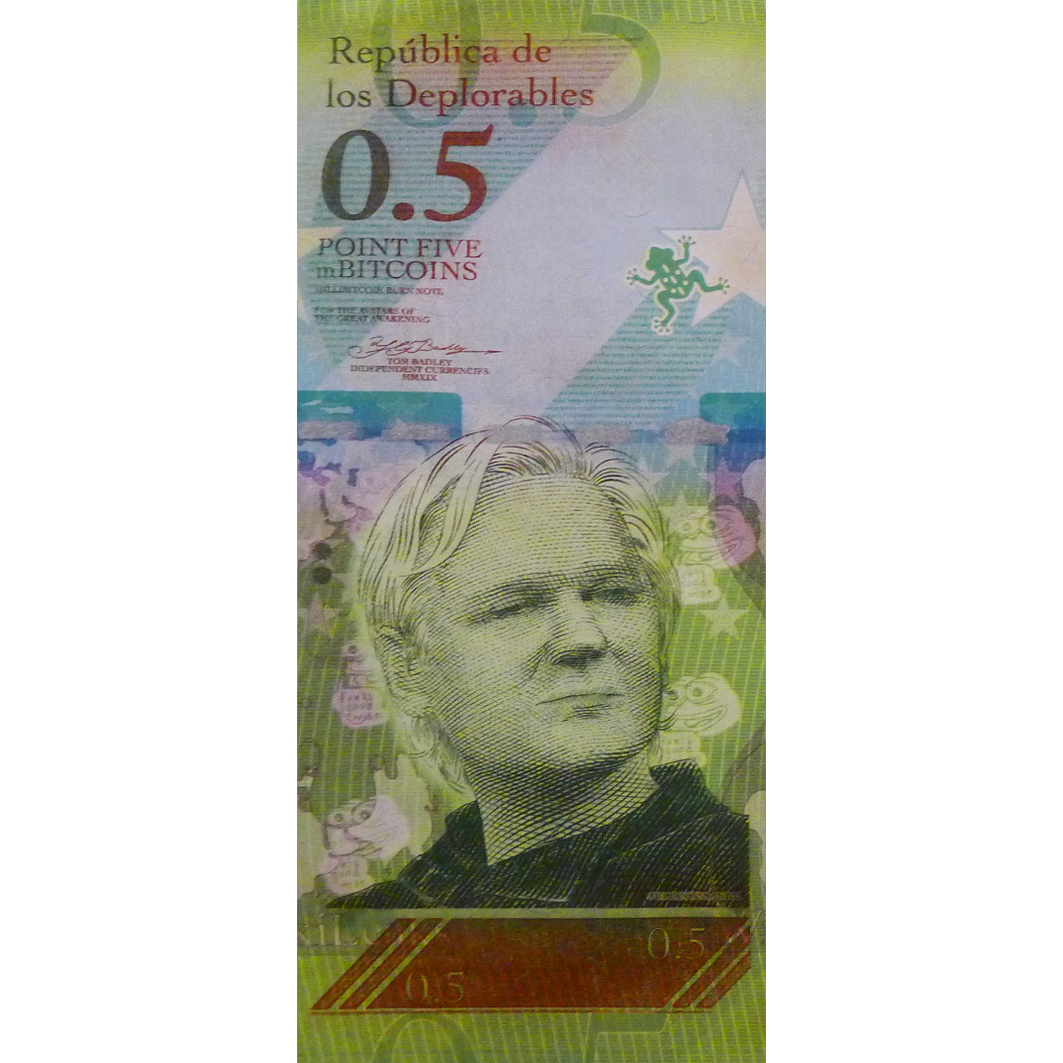 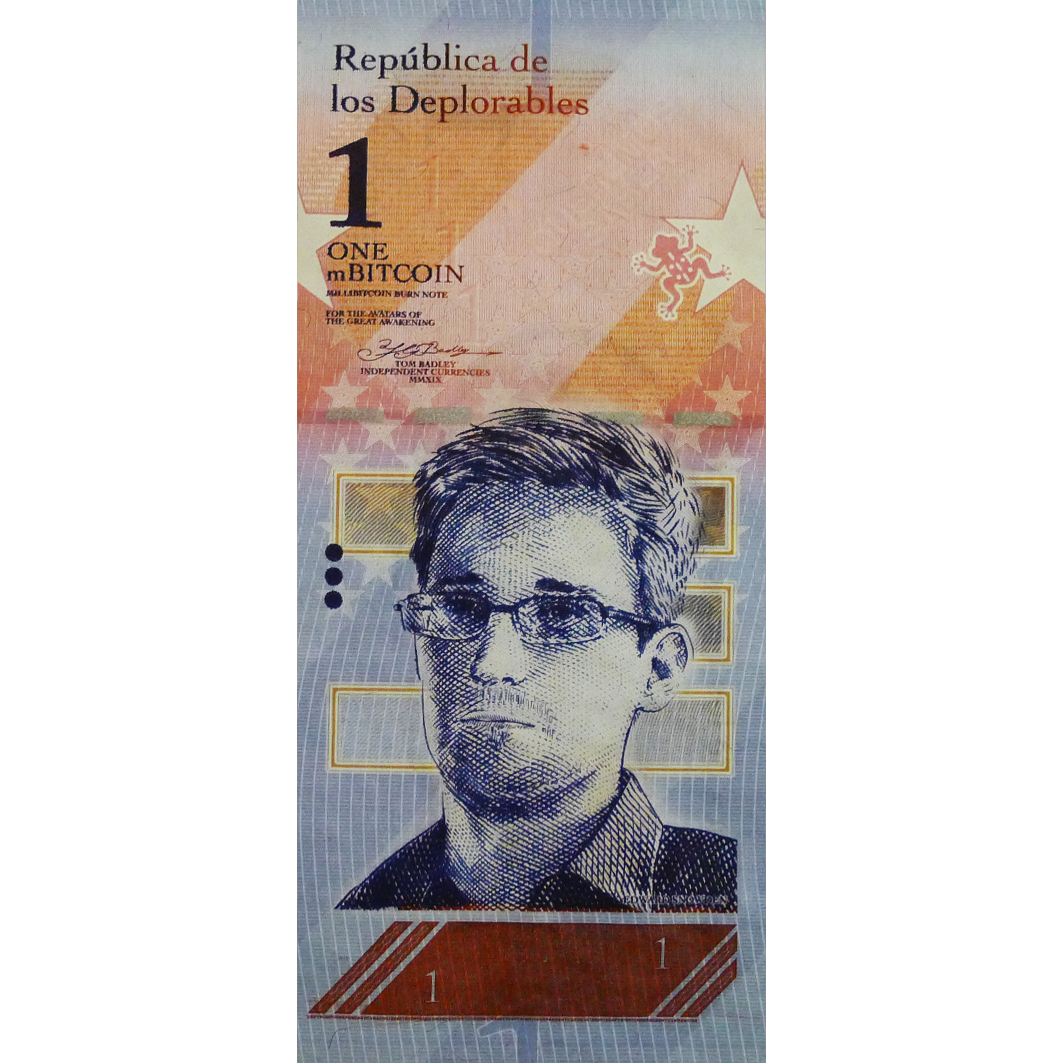 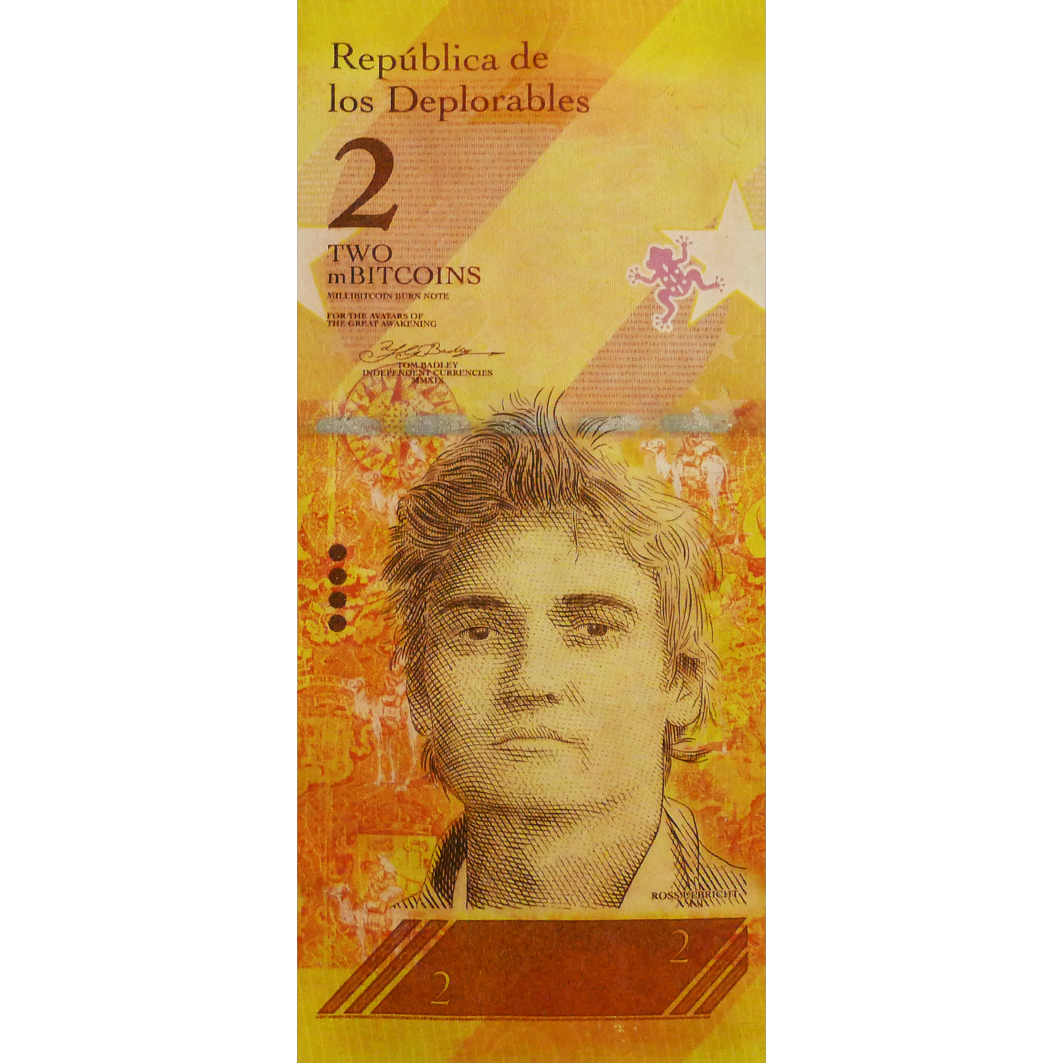 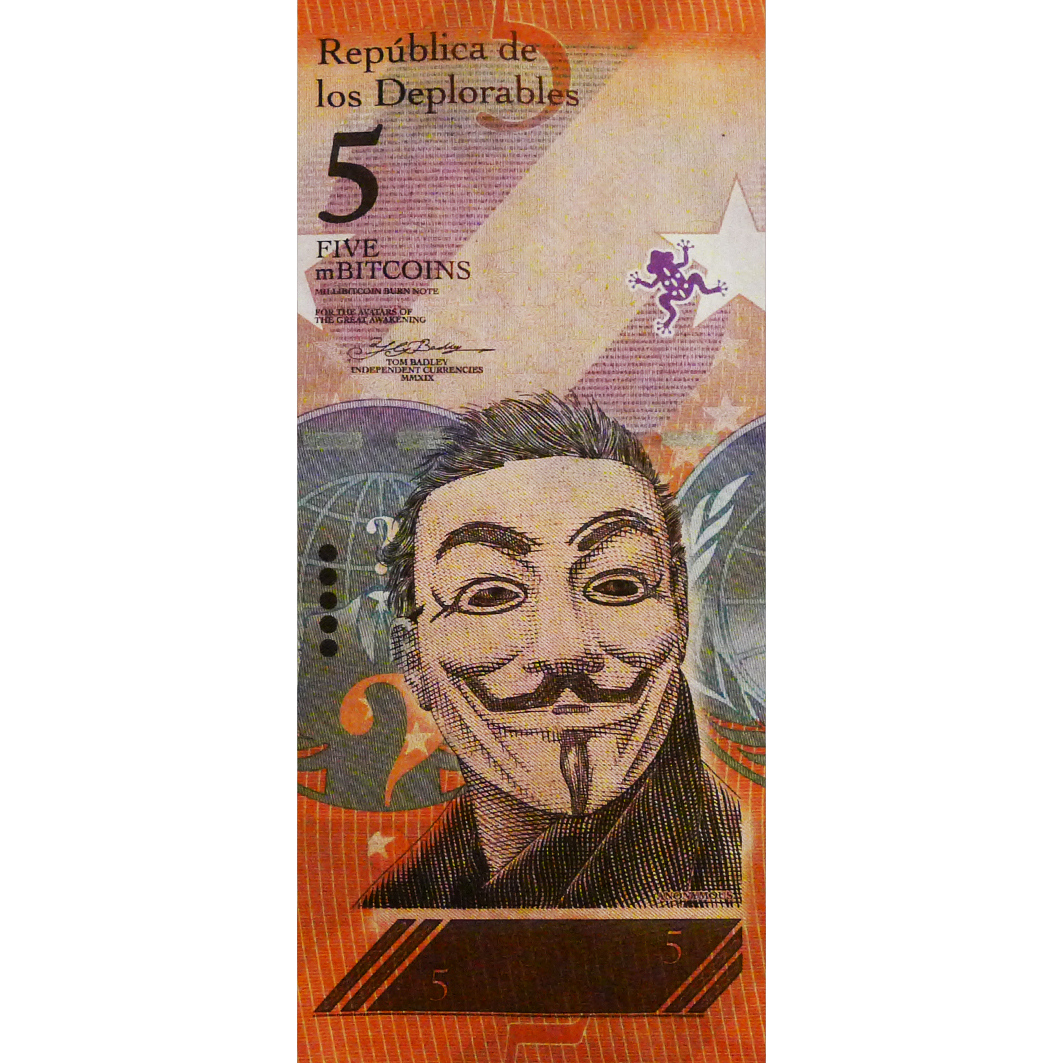 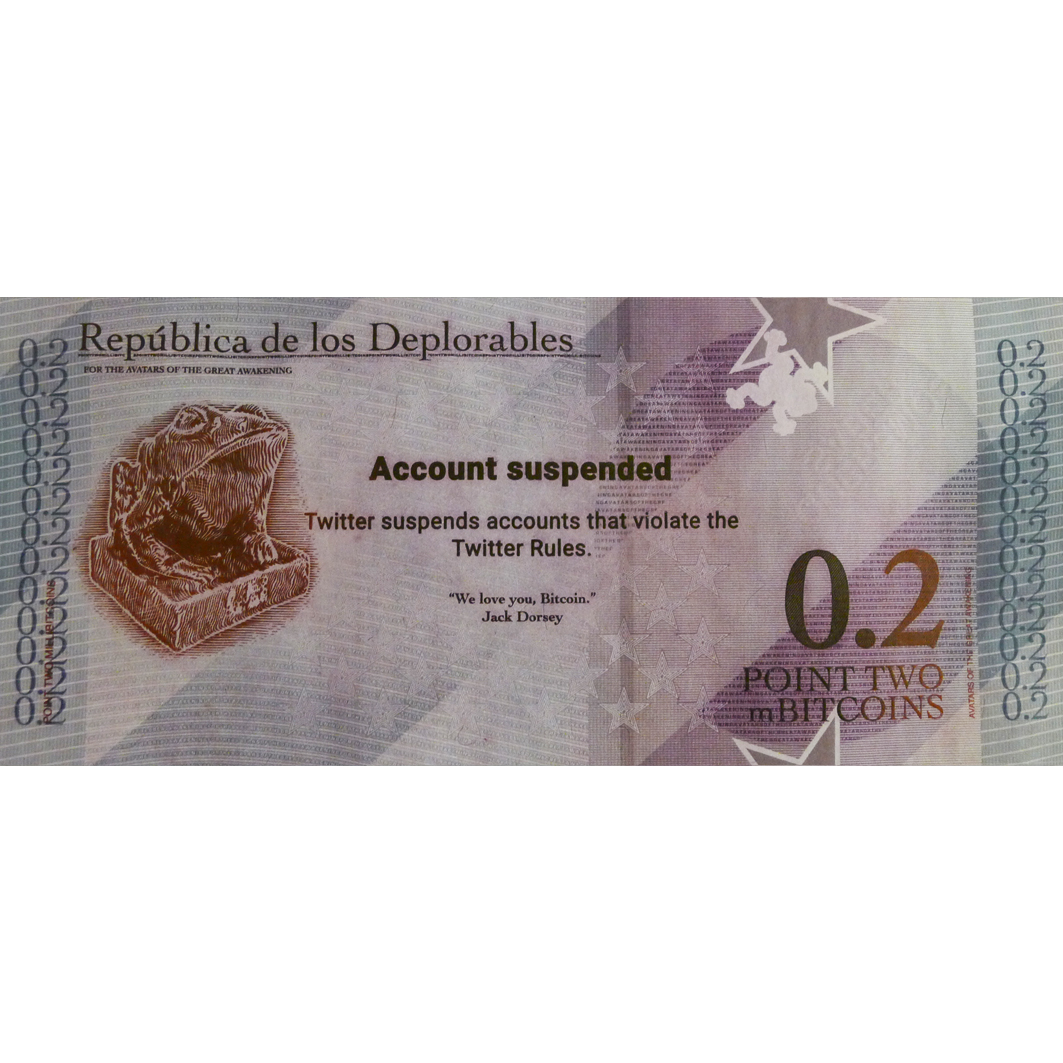 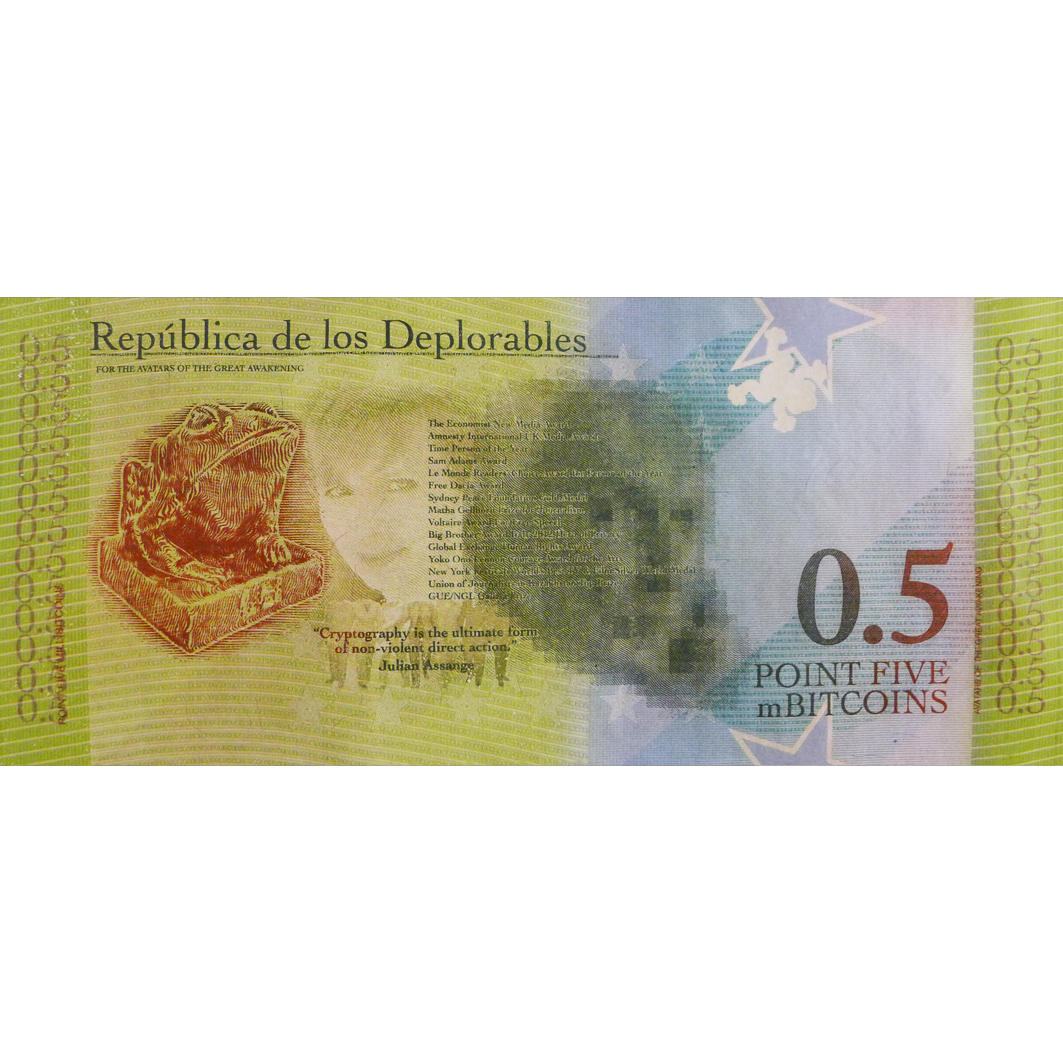 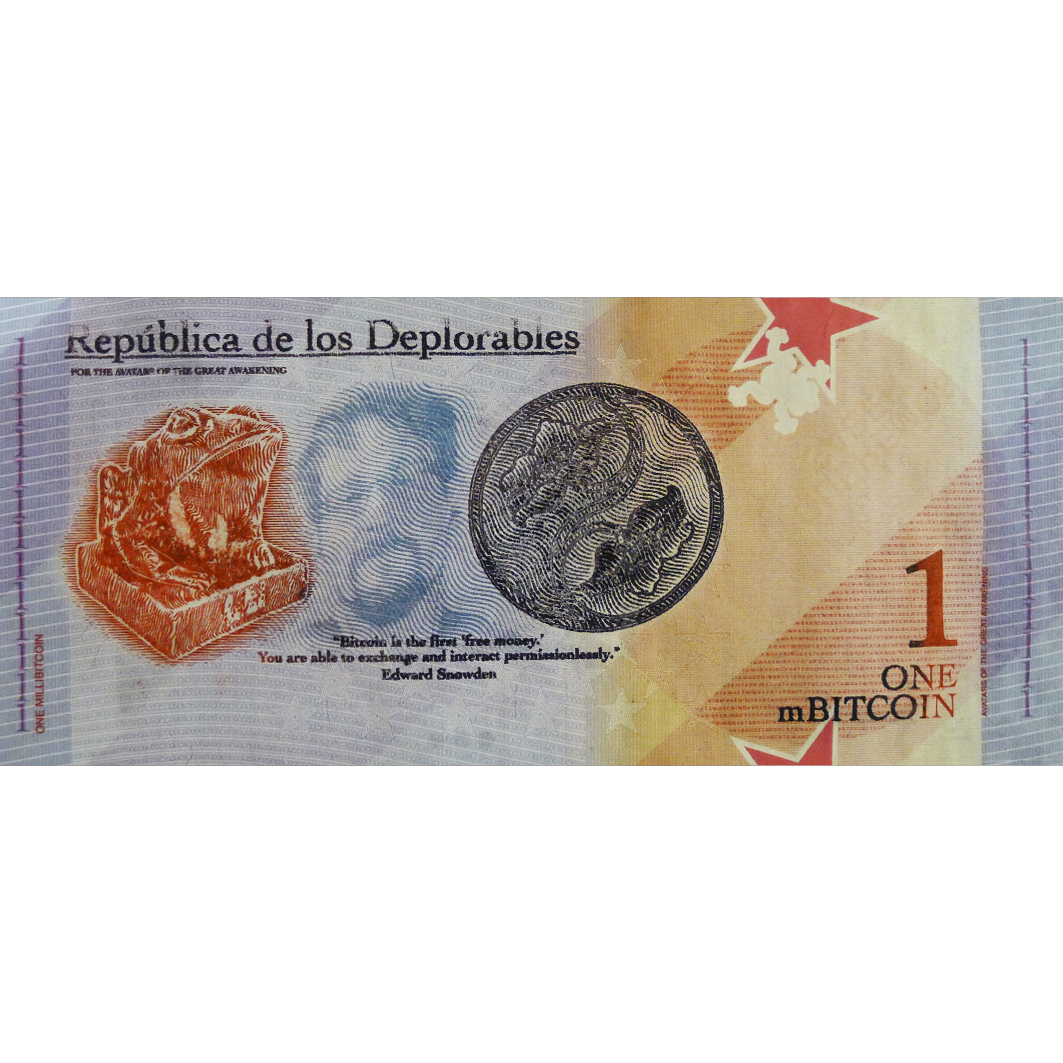 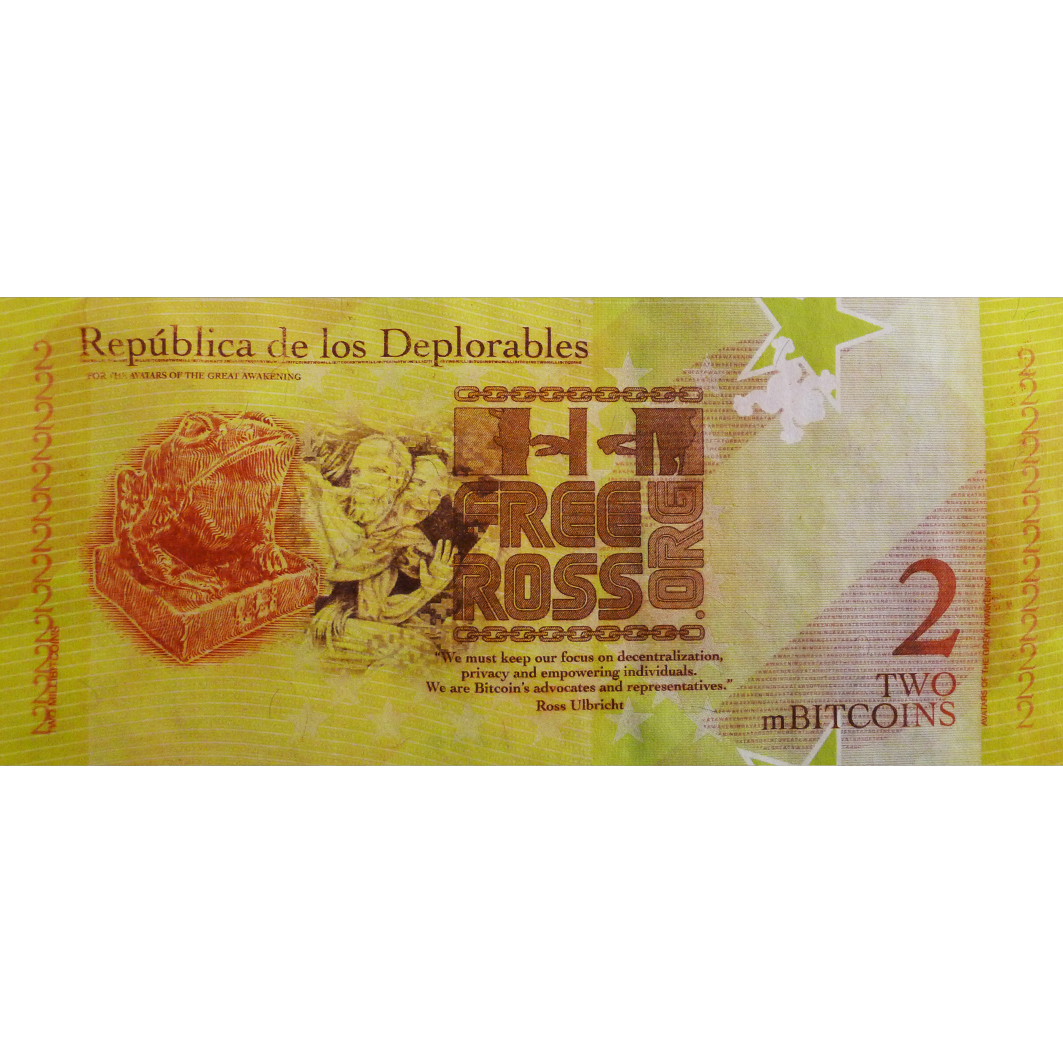 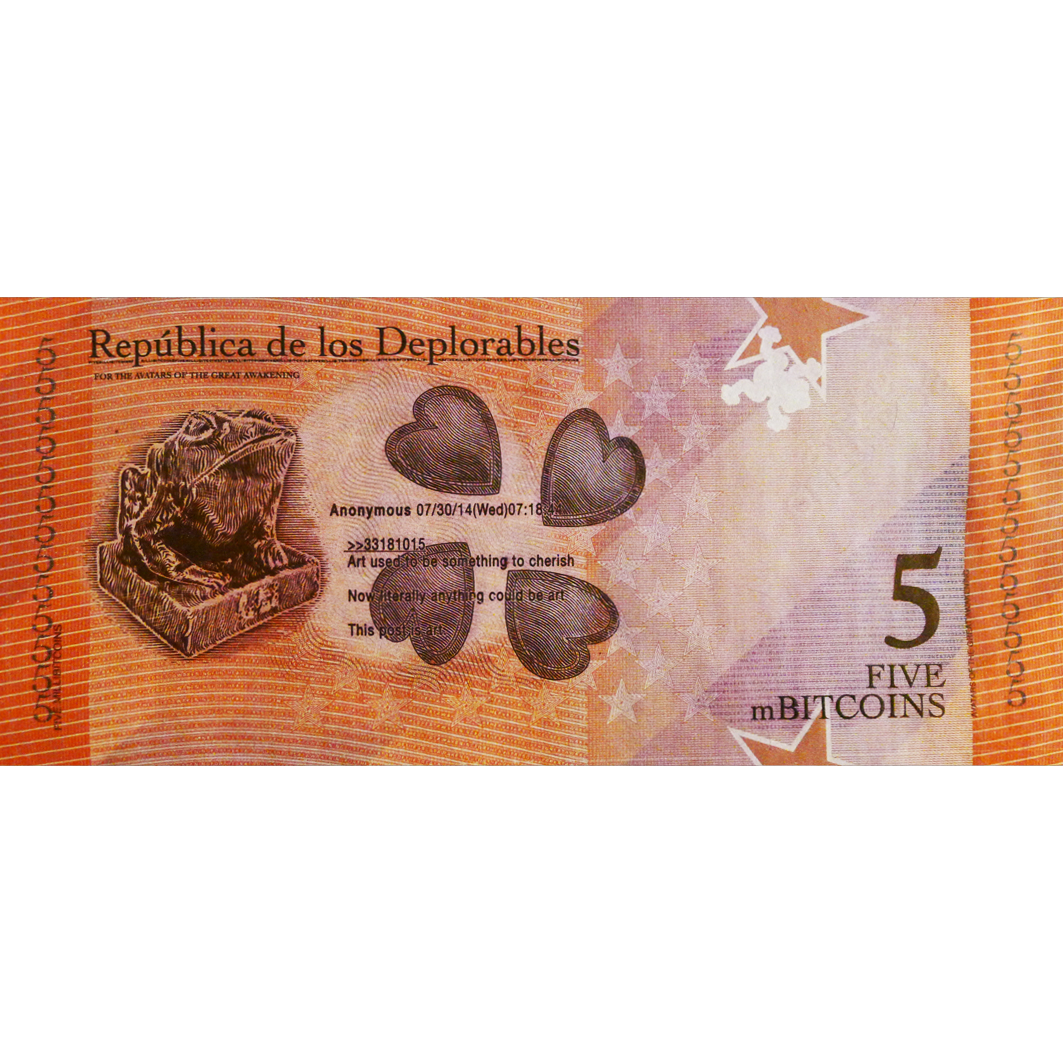 THESE ARTWORKS ARE AVAILABLE IN LIMITED AMOUNTS AT AT TOMBADLEY.NET

The Avatars series was first sold in pre-order sale through www.tombadley.net, wqhich ran from November 23rd 2019 – December 9th 2019. A maximum of 60 pieces of each design will be produced.

Each note is uniquely serial numbered. A numbering system tells the buyer what note it is, and what type of note they have. The serial is made of two groups of 3 digits.

’05’ is the value. The first ‘A’ is the design variation. If there are any modifications made to the design, this number will change.

‘A23’ refers to the edition number. Each note has a unique number, from 1 to 60. The letter has the following code:

P = an artist’s proof; an uncut sheet of 3 notes. Proofs are test prints that are made before the actual print.

X = a test note that usually has an error. It is unlikely that such notes will ever be released. They will be used for display and internal purposes.

R= If a serial number as an ‘R’ at the end, it means it is a replacement note, because the original was lost or damaged. Even if a note is missing, its uniqueness is guaranteed.

FIND OUT MORE AT TOMBADLEY.NET